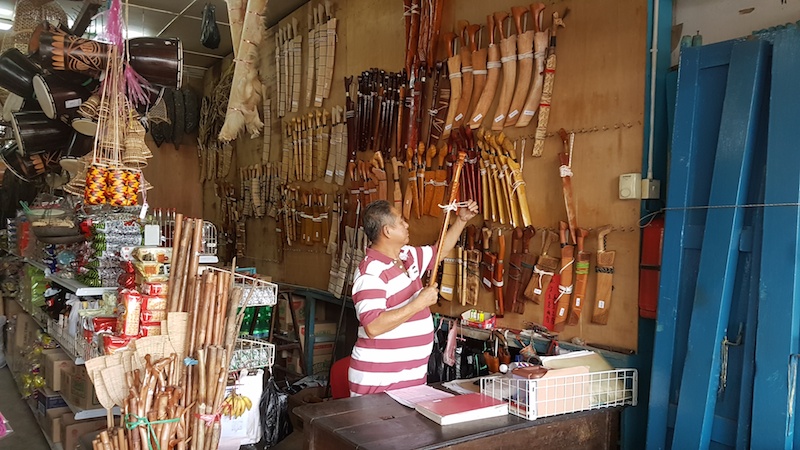 The strain of the last three hours was no longer an issue. I had arrived in Lachau, the small village near the Malaysian and Indonesian border of Borneo. I read that this place is where the Iban headhunting tribe come from the Indonesian side, over the mountain ridge and sell their goods. I gave the place a quick glance over, wondering where the blades might be. I laughed. I rode three hours to get here?!

Can’t say I wasn’t slightly disappointed. There were hardly any tribal stalls, the place looked just like you would imagine a market in the middle of nowhere would look like, basically like not much. The stalls were lined up next to Chinese coffee shops, the majority of them were selling dried fishy looking things, clothes and accessories or fruit and veg. There was one tribal clothes stall. No knives or swords were to be found as I wandered the short strip, my interest mainly in the fruit I had never seen before.

I got to the end of the strip and found two Chinese shops that sold all sorts of household goods, including blades. One had just a few which were more like souvenirs. I quickly rejected those, as I really didn’t want one that said Sarawak on it. The shop next door had about 100 blades hanging from one of the walls. This was it. I hope I could find something…

I went through all of them. The majority were parangs, the most common blade type in Malaysia. Nice ones, but I wasn’t after one, plus I already had a good machete for chopping. I came all the way here for something special, not something every day. As I was going through these, unsheathing more and more parangs, a minivan full of tourists rock up and their guide brings them straight to the shop. I wondered how it would be riding in one of those, then I quickly dismissed the thought of having to go through another endless period of boneshocking bumps on the scooter instead of sitting in a comfortable car.

The group proceeded to look at the blades at the front of the shop and one of the guys seemed to be impressed by the bigger parangs. Do you really have a jungle to chop through with that back home, I wondered. One of the girls picked up a short blade and she asked the driver what that was for. Stabbing people or slicing chickens, I mumbled the truth. You can use it to open letters, the driver said. I chuckled.

The shopkeepers attention was on the group and eventhough his English was limited, I would want to pick his brain about the knives and swords, so since I had seen enough parangs I got out and hit the coffee shop. I try to go by a vegan diet, but sometimes eggs and cheese find their way in my belly. This was one of those times, as I knew that just fruit wouldn’t sustain me enough for the return trip. 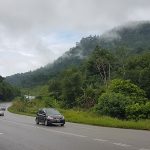 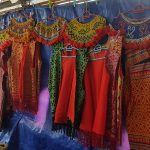 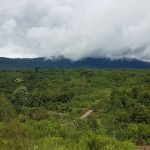 Refuelled by tea and three boiled eggs, I came back to see the group gone and focused on the ten or so headhunter swords I spotted earlier. I got him to take them all down and proceeded to look at each one in detail. What I look for in a blade is usually as follows:

My shortlist was of three typical headhunter blades and one atypical one. The typical ones had bone handles, even hair on some of them, carved blades and very elaborate sheaths. Eventhough these were pretty and very tribal looking, I knew that these were all aesthetic things. These were blades that would look nice on a wall. I wanted one that I could use. So the only blade there that fit this category was the only one with a hardwood sheath and handle, and a blade shape completely different to the others. It was thicker and heavier than the others and felt like a beast amongst cattle.

In the end it was an easy choice. I had found what I was looking for. Let’s talk price, I said to the shopkeeper.

Few minutes later I walked out with the sword on my back, past the ladies selling fruit and veg, sampling some of the greens I had never seen. Pleased, I tanked up my bike and got back on the road. I had another six hours till I had to get the scooter back. Enough time to go to a restaurant back in Kuching and maybe even a massage. Little did I know that those plans would literally snap not long from now.

An hour into my return journey, my riding posture had evolved into a sort of semi-squat, where I would crouch down and keep my head close to the dash to reduce drag, allowing me to distribute at least half of my body weight on my legs. This was brilliant I thought, not only did it release tension from my back and hips, whenever I would hit a bigger bump, my legs would take most of the strain and this meant that I could go much faster comfortably, ignoring the klonks. I would be back in no time!

100km to go and I’m going down a hill at a top speed of around 90kmh, with a truck behind me getting ready to overtake. Suddenly my engine makes an unusual noise and the bike starts to slow down rapidly. Great. I quickly hit the indicator and pulled over, letting the queue of vehicles soar past me. The engine was still revving but there was no acceleration whatsoever, so I deduced that it must be a snapped fanbelt or similar. I rang the rental place. What followed was not a very pleasant series of phonecalls.